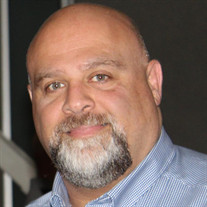 Ali Rahnavardi was born January 30, 1968 in Tehran, Iran. Growing up, Ali played numerous sports. He once said the only sports he thought he never played were ice hockey and curling. He excelled at racquet sports, especially tennis and racquetball. He played soccer, cricket, rugby, swimming, football, skiing, and wrestling. He was a natural athlete and could pick up almost any sport with little to no effort. Later in life he played golf and took up fishing. He moved to England in 1979 to attend boarding school when the Revolution happened in his home country. In 1981, Ali, his brother Amir, and his mother Guity, joined his dad Hassan “Ronny” in California. He attended high school in WestLake Village, just outside of Los Angeles, and graduated in 1985. He attended Junior College at Moorpark Community College in Moorpark, California. He then spent several years managing a Domino's Pizza in Westlake Village. In 1990, Ali visited Iowa and fell in love with UNI. He started at UNI to finish his education in the Winter of 1991. He always said if he had visited in December instead of August, he never would have moved to Iowa. He arrived in January 1992 to a winter wonderland, and no winter coat. Ali met his future wife Joanna through a family member and they started dating in the fall of 1992. They had their son Zach in February of 1994, and were married in Cedar Falls on October 1, 1994. After graduating from UNI with a degree in Physical Education and Coaching, Ali and Joanna decided to make Cedar Falls their permanent home. In September 2002, Cael arrived to complete their family. Ali started coaching in Waterloo in the spring of 1995, where he was the first coach for the Men’s Soccer program at West High School. He returned to school to get his special education endorsement during this time. In addition to coaching soccer, he was a substitute teacher and coached club volleyball. Before getting a permanent teaching job in Waterloo, Ali substitute taught in several districts, he was also an assistant volleyball coach for Union/LaPorte. In the spring of 1998 he was named the Varsity Volleyball coach at West High and started teaching for the district as a Special Education teacher. For several seasons he coached volleyball in the fall and soccer in the spring. After handing the soccer program off to his very capable assistant coaches, he took a coaching position as an assistant wrestling coach at West High. He retired, or so he thought at the time, from volleyball in 2006. In 2008, he was named the Varsity Volleyball coach at East High. In 2011, he left high school volleyball. He coached freshmen volleyball at Holmes Junior high for 2 seasons before focusing on spending more time with his boys and their activities. He was a volunteer coach for almost every season for Zach and Cael. He loved coaching and wanted to make a difference for countless athletes, including his own boys. Ali continued to teach Special Education in Waterloo until his passing, having taught at West High School, East High School, and Expo High School. In his spare time he loved fishing, golf, watching sports, yelling at officials, playing cards, and spending time with family and friends. Ali is preceded in death by his son Zach. He leaves behind his wife Joanna (Marquart) Rahnavardi, his son Cael Rahnavardi, his parents Hassan “Ronny” Rahnavardi and Guity Rahnavardi and his brother Amir Rahnavardi. “I have fought the good fight, I have finished the race, I have kept the faith. ” 2 Timothy 4:7. Ali fought the good fight, he was a relentless warrior until the end. Ali passed away peacefully December 10, 2021. He touched us all and his generosity and loving spirit will be missed.

Ali Rahnavardi was born January 30, 1968 in Tehran, Iran. Growing up, Ali played numerous sports. He once said the only sports he thought he never played were ice hockey and curling. He excelled at racquet sports, especially tennis and racquetball.... View Obituary & Service Information

The family of Ali Rahnavardi created this Life Tributes page to make it easy to share your memories.

Send flowers to the Rahnavardi family.