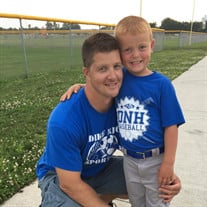 CEDAR FALLS-Andrew K. “Andy” Kaufman, 40, of Cedar Falls, died Friday, July 16, 2021 along with his son, Beckett at his home. He was born March 31, 1981, in Waterloo, Iowa, the son of Kevin L. and Lori (Schutte) Kaufman. Andy graduated from Wapsie Valley High School in 1999. On September 9, 2006, he was united in marriage to Brook Miller at St. Patrick Catholic Church in Cedar Falls. He was employed as an insurance agent with TruServe in Readlyn and owned and operated A to Z Rentals. Andy was kind, hilarious, thoughtful, and always willing to help anyone with anything. He was always the proudest dad and husband. Andy loved the opportunity to tell you about his family, and it was always so clear how much he loved them. Survived by his wife of Cedar Falls; four children, Laikyn, Bode, Quincie, and Rowan Kaufman, all at home; his parents, Lori (Barry) Fortsch of Readlyn and Kevin (Denise Youngblut) Kaufman of Fairbank, Vicki Kaufman of Fairbank; siblings, Adam (Tammy) Kaufman of Fairbank, Aaron (Audrey) Kaufman of Sumner, Dana Sullivan of Charles City, Derek (Amy) Kaufman and Carter Kaufman of Fairbank, Abby (Jake) Lukins of Redfield and Alex (Abi) Fortsch of West Des Moines; mother-in-law, Jackie (Bob) Schneider of Fairbank; father-in-law, Jim (Jen) Miller of Hutchinson, MN; brothers and sisters in law, Lee (Carly) Schneider of Gilman, Kirk Schneider of Waterloo, Christie (Rylan) Zwanziger, of Nashua, Katie (Josh Poock) Schneider of Decorah, Jason (Kristen) Schneider of Fairbank; step siblings, Katie Bruns and Jake(Laura) Bruns of Hutchinson, MN; and maternal grandfather, and Elton Schutte of Denver, IA. Preceded in death by his grandparents, Shirley Schutte, Erv and Lou Fortsch, Wally and Milly Kaufman and step sister-in-law Karina Bruns. Services 10:00 a.m. Thursday, July 22, 2021 at Orchard Hill Church in Cedar Falls, with interment in the Immaculate Conception Cemetery in Fairbank. Visitation will be from 4 to 7 p.m. at Orchard Hill Church on Wednesday. Online condolences may be left at: www.richardsonfuneralservice.com. Memorial contributions may be directed to the family.

The family of Andrew Kent Kaufman created this Life Tributes page to make it easy to share your memories.

Send flowers to the Kaufman family.