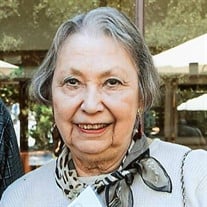 Not sure what to send?

Barbara Jane Moore died in Winter Park, Florida on March 20, 2022, at the age of 85. Barbara was born on February 27, 1937, in Cedar Falls, Iowa to Robert John Moore and Vivian Lenore (Aldrich) Moore. The family had lived and farmed in the area for several generations. When the working men on the family farm were drafted into World War II, the family relocated to New Hartford, Iowa, ten miles to the west. While Vivian cried the whole way, Barbara was excited, as her grandfather, Harry Moore, had promised her a pony once she moved to the farm. With two younger brothers, Jim and Steve, Barbara helped on the farm. She considered the farm years the formative years in her life, an experience she shared at a New Hartford High School Reunion in 2014. [see full text, below] After graduation from high school, she enrolled at the University of Iowa, but took a break after two years to work at the Pentagon in Washington, D.C. While in D.C., she met John Atkin Moore, Jr. (no relation) of Detroit, Michigan, who was serving at Fort McNair. She returned to Iowa State in Ames, as that would allow her a faster pathway to graduation, and the two were married shortly after her graduation. John’s legal career took them from Detroit to San Diego, where her two sons, Bill and Brian, were born, and finally to Oakland, California, where daughter Julia was born. Barbara was very active her in community. She taught Sunday School to Second Graders at every church she attended for over 40 years, and was a group leader with Bible Study Fellowship for a decade. She was active in the PEO, and as a walking tour guide for Oakland Tours. In this capacity, she was interviewed several times on the television show “Bay Area Backroads,” and quoted in the book of the same name. One of her favorite projects was the Just for You thrift shop in Oakland, which raised and distributed over $80,000 to local charities and earned her a Business Arts Award from the Chamber of Commerce at a reception which also honored the Pointer Sisters. Her work with Just for You lead to the board of the Oakland Zoo, where she served for many years. During retirement, a letter engraved on an ancestor’s locket sparked an interest in genealogy that lasted for 30 years, leading to membership in the Daughters of the American Revolution, and other historic and genealogical organizations. This interest was shared by John. They traveled across the country, visiting many cemeteries, courthouses, and libraries. They never discovered a common ancestor, but they did find ancestors that knew one another, including one of John’s ancestors who had rescued one of Barbara’s ancestors from an abduction. Barbara is survived by her brother Stephen Moore of New Hartford, son William Bowen Moore of Kaneohi, HI, her daughter, Julia Anne Kerns of Orlando, FL, and her grandchildren, Alexander Okawa Moore, Mikaela Pomaikai Moore, Christopher Todd Kerns, Andrew John Kerns, and Katherine Mary Kerns. She was preceded in death by her son, Brian Edward Moore. A graveside service will be held July 26 at Oak Hill Cemetery in New Hartford, Iowa. A memorial service for both Barbara and John will be held August 6, 2022, at 1:00 pm at First Covenant Church of Oakland, California where the Moore’s worshipped for 30 years.

Barbara Jane Moore died in Winter Park, Florida on March 20, 2022, at the age of 85. Barbara was born on February 27, 1937, in Cedar Falls, Iowa to Robert John Moore and Vivian Lenore (Aldrich) Moore. The family had lived and farmed in the... View Obituary & Service Information

The family of Barbara Moore created this Life Tributes page to make it easy to share your memories.

Send flowers to the Moore family.