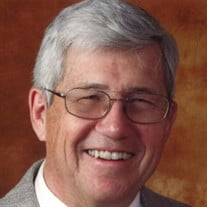 Bruce R. McCart died December 27, 2021, in Cedar Falls, IA after a 2-year battle with prostate cancer. He died peacefully with his wife Marian “Pete” beside him. Born December 21, 1938, to Mattie (Toft) and Harold McCart, Bruce grew up in Omaha, NE. He met Marian while attending Carleton College, Northfield, MN. They married July 8, 1961 and had a 60-year loving-but-not-saccharine marriage. During that time, they raised three daughters and a son in Rock Island, IL. Bruce received his Ph.D. in physics at Iowa State University, Ames, in 1965, and taught at Augustana College, Rock Island. After a 40-year career, Dr. Bruce and Rev. Pete retired in 2004, moved to Waverly, IA in 2006, and then Cedar Falls in 2016. Known for his love of life, humor, and family and friends, Bruce enjoyed teaching, Division III sports, books and movies, and being with his family. Einstein and Snoopy were his heroes. He and Pete spent their days together traveling, camping, playing bridge, walking together, and being involved in church. They modeled for their children how to serve others and maintain a marriage despite life’s challenges. In his final days, Bruce talked of his good and fortunate life. Bruce’s smile and kindness, jokes and storytelling will all be missed. Bruce is survived by his wife, daughters Anne Drolet and Marian Motz, son Daniel McCart, their spouses and partners, and numerous grandchildren and great-grandchildren. He is predeceased by daughter Jennifer McCart, his parents and one brother. A memorial service will be held January 8 at 10:30 at First Presbyterian Church, Cedar Falls. It will be held in-person – masks required - and live-streamed on the church Facebook page “First Presbyterian Church of Cedar Falls, Iowa.” It will also be available afterwards on the church website firstprescf.org. His decision to donate his body to the University of IA Medical School reflects his value of scientific research. A private interment will be in Rock Island at a later date. Memorials can be made to Augustana College, Rock Island, IL; First Presbyterian Church, Cedar Falls, IA; and the American Cancer Association (https://www.cancer.org/)

The family of Dr. Bruce R. McCart created this Life Tributes page to make it easy to share your memories.

Send flowers to the McCart family.