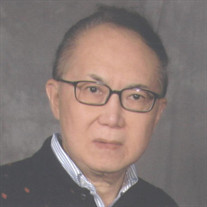 CEDAR FALLS – Ching S. Woo, 84, of Cedar Falls died Wednesday, October 7, 2020 at his home. He was born April 20, 1936 in Xiamen, China, son of Simon and Yu-chen Chen Woo. On August 29, 1972, he was registered and married in Hong Kong to Susan Lim. They celebrated their wedding with a ceremony on December 30, 1972 in Cedar Falls. He earned his BA from Cornell University in Ithaca, New York, MS from University of Michigan, and Ph.D. from University of Kentucky, all in Chemistry. He was a Professor in Chemistry at University of Northern Iowa for 32 years, retiring in 1998. Survived by: his wife, Susan L. Woo; two daughters, Lynn L. (Pat) Cicerchi of Brecksville, OH, and Leslie L. (Nate) Kieffer of Newton, MA; five grandchildren; a brother, Woo Ping of Taipei, Taiwan; a sister, Portia Su of Fresno, CA; nieces and nephews. Preceded in death by: two sisters and two brothers. Private services will be held. Richardson Funeral Service is assisting the family. In lieu of flowers, memorials may be directed to a charity of donor’s choice.

The family of Ching S. Woo created this Life Tributes page to make it easy to share your memories.

Send flowers to the Woo family.