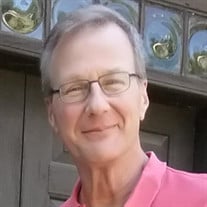 Dan Edward Lorenz, 65, died March 29, 2022 at Cedar Valley Hospice Home after a battle with Lewy Body Dementia. He was born in Cedar Falls, May 11, 1956, son of Elmer M. and Ardys (Anderson) Lorenz. Dan attended Cedar Falls schools and was a graduate of the University of Northern Iowa. He was a Navy veteran, and married Chris Hohl on September 13, 1981. Dan worked in water treatment and chemical management as a contract employee for BP at the John Deere Engine Works, retiring in 2007. Dan's passions were his family, music, gardening, and anything outdoors. He played mandolin beautifully, was on the Cedar Falls Garden Tour twice with 2 different homes, and was an avid fisherman. He had many wonderful fishing trips to Canada with brother-in-law Sam, and many special summer weeks at Horseshoe Lake in Minnesota with Chris. Dan and his wife enjoyed many travels, concerts and music festivals together. And who else would choose to read the Complete Works of Shakespeare?!? Having grown up in the restaurant business, Dan didn't follow that career path, but was an excellent cook and baker, and always added chipotle peppers to almost everything he ate! Dan was also an animal lover. He even named a squirrel who would eat out of his hand! Per his wishes, Dan has been cremated. Dan was a quiet joyful soul with a sharp sense of humor. He will be sorely missed by all the lives he touched, especially his little rescue cat, Deja, who liked to groom his hair. In lieu of flowers, memorials can be designated to Cedar Valley Hospice or the Western Home Foundation. He is survived by his wife, sisters Micalea (Mike Knapp) Lorenz, Annette (Jim) Wilson, brothers, Randy (Lynet) Lorenz, all of Waterloo, and John (Sherry) Lorenz of Lincoln, NE, sister-in -law and brother-in-law Becky and Sam Senti of Story City, and special cousins, nieces and nephews. A Celebration of Life will be held Tuesday, April 5, 2:00-4:00 p.m. at the Diamond Event Center at Western Home Community in Cedar Falls, with special music and an opportunity for friends to share at 3:00 p.m.

The family of Dan Lorenz created this Life Tributes page to make it easy to share your memories.

Send flowers to the Lorenz family.