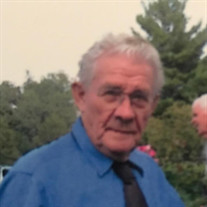 Dean F. Avenson (1926 – 2020) Grundy Center – Dean F. Avenson, 94, of Reinbeck Iowa, Cedar Falls Iowa and McAllen Texas passed peacefully in his sleep on Monday December 21st at the Grundy Care Center. Dean was born on September 11, 1926, in Dorset MN. He was the son of Egbert and Albertina (Lindberg) Avenson. Dean served in the US Army during World War II. When he returned home he married the love of his life Ardis Marie (Hurst) Avenson. They were united in marriage in Nevis, MN in October, 1947. They just celebrated their 73rd wedding anniversary. When Dean and Ardy moved to Iowa he started working at John Deere, then he worked for Universal Hoist and later opened his own business. Dean was the owner of the 410 Body Shop for over 30 years until he retired in 1993. He was driven by his passion to restore vehicles. His interests included attending the Oshkosh airshow, motorhome club and bluegrass music. Dean could always be found tinkering in his workshops or a home improvement project. For several years in the 1990s, Dean and Ardy drove an oil truck. They traveled around Iowa hauling used oil to be recycled. During that time, they got to see many small towns and meet many good people. The couple had friends all over the country. He was always working on engineering and building his own original construction projects or finding new ways to fix old problems. He worked several years on his own design of a perpetual motion machine. In 2008, during the great Cedar River flood, their long time home in Cedar Falls was destroyed. Devastated but undeterred, they relocated to Reinbeck while still maintaining their winter residence in Texas. For his 90th Birthday, Dean wanted to have a party! He held a big shindig at his favorite local pizza place in Reinbeck. He greeted many family and friends at the door and kept his favorite “Everything” pizza flowing! Dean loved all the toppings just like he loved so many different pursuits in life. No matter what Dean was working on, Ardy, the love of his life was right there helping him. Dean and Ardy have been devoted members of the Church of Christ in Cedar Falls, IA and McAllen, TX. He is survived by his wife, Ardis Hurst Avenson; daughter Bonita (Curt) Wollin, son Kenneth (RaeJean, deceased) Avenson, daughter Rebecca (Ronald, deceased) Hicok, sister Eunice, grandchildren, great grandchildren, nieces, nephews and many more family members. The burial is Monday December 28th at 11 am with a brief graveside service. Please no flowers. Please send cards and condolences to the Grundy Care Center attn Ardy Avenson.

The family of Dean Frederick Avenson created this Life Tributes page to make it easy to share your memories.

Send flowers to the Avenson family.