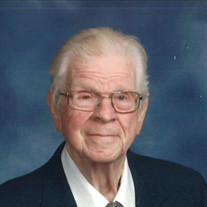 Waterloo - Don Larry Winther, of Waterloo, Iowa, died on October 31, 2021 at Bartels' Lutheran Home in Waverly of natural causes. He was born May 21, 1934, in Thornton, Iowa, son of William D. and Nellie (Frey) Winther. Don graduated from Thornton High School in 1952. In September of 1954 he enlisted in the Air Force and served mostly in Japan and Hawaii. He was discharged May 10, 1958. He went to Hamilton's Business School and graduated in 1962. He worked as a bookkeeper in Albert Lea, MN until 1971. In 1970 he married Betty A. Johnson. They moved to Waterloo in 1971 where he was working for Bill Burton Ford. He got his real estate license and formed Winther Real Estate. He also was a letter carrier in Cedar Falls for 6 years. Don is preceded in death by his parents, grandparents, brother Phil, and uncles and aunts. He is survived by his wife, Betty, sister-in-law, Elizabeth (Liz) Winther, his sister-in-law, Carol (John) Engel, brothers-in-law Donald (Emma) Johnson and Robert (Anita) Johnson, cousin Donna (Lyle) Pals, other cousins, nieces and nephews and their children, and many other friends. Don played basketball and was a record-holder baseball pitcher during his school years. He enjoyed many years of golfing, bowling, old-time dancing, WWII history, and going to band concerts. He was an avid Bible reader with a strong belief in God. Service will be 10:00 a.m. Wednesday, November 3, 2021 at the Larsen Chapel of Nazareth Lutheran Church in Cedar Falls, with interment in the Westview Cemetery, LaPorte City. Visitation will be from 5 to 7 p.m. Tuesday at the Richardson Funeral Service in Cedar Falls. Memorials may be directed to Nazareth Lutheran Church, the Church of your choice, or to Don's favorite charity: The Salvation Army. Online condolences may be left at: www.richardsonfuneralservice.com

The family of Don Larry Winther created this Life Tributes page to make it easy to share your memories.

Send flowers to the Winther family.