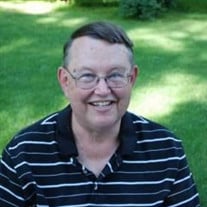 CEDAR FALLS — Rev. Donald L. Feuerhak, 72, of Cedar Falls, died Thursday, February 13, 2020, at MercyOne – Waterloo Medical Center, of multi-organ failure. Donald was born February 15, 1947, in Deronda, Wisconsin, the son of Leonard and Ardis (Iverson) Feuerhak. He married Barbara (Bowen) on December 21, 1969, at the United Methodist Church in Rock Falls, Iowa. Donald graduated in 1965 from West Bend High School in West Bend, Wisconsin, and from Luther College in 1969. The first two years of seminary, he attended the Lutheran School of Theology in Chicago. He then graduated from Wartburg Seminary in 1973. He served congregations in Ames, Wyoming, Clarksville, Fredsville, and Cedar Falls. He also served as a Chaplain at Bremwood Lutheran Services in Waverly and at Covenant Medical Center in Waterloo; and taught Death and Dying for 23 years at UNI and a few years at Wartburg College in Waverly. Survived by: his wife; two daughters, Jennifer (Paulo) Shila of Omaha, NE, and Lisa (Jeff) Buettner of East Peoria, IL; four grandchildren, Delaney and Katelyn Shila, Benjamin and Colin Buettner; and one great grandchild, Brooklyn. Preceded in death by: his parents. Services: 11:00 a.m. Tuesday, Feb. 18th at St. John Lutheran Church, Cedar Falls. Visitation from 4 to 6 p.m. Monday, Feb. 17th at Richardson Funeral Service and also for one hour prior to the service at the church. Memorials may be directed to the family for several charities. Donald enjoyed fishing for trout in Northeast Iowa and was a collector of model trains. His interactive personality made him a good listener with compassion for others. He loved his family and was a big supporter of Cedar Valley Hospice and received their services near the end of his life.

The family of Rev. Donald Feuerhak created this Life Tributes page to make it easy to share your memories.

Send flowers to the Feuerhak family.