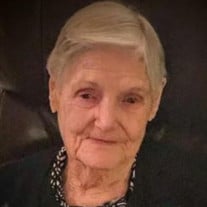 Eileen Gibson was a beloved wife, mother, grandmother, and friend during her incredible 96 years of life. She passed away peacefully at her home Tuesday, May 17th, 2022. Eileen had a long and full life. She was born on February 18, 1926, in Sheffield, England, to Arthur and Lavinia White. Eileen had two brothers, Freddy and Arthur, and a sister, Anne. After completing school at the age of 14 she went on to work at a company called Pickering’s making shoe polish and cleaning supplies. Eileen met the love of her life, Bert “Ray” Gibson, in November of 1944. While waiting at the tram stop to head home after her shift, Eileen was approached by Ray asking for directions. He was an American soldier stationed in England during WWII. They struck up a conversation in which Ray asked her for her address and sometime later he showed up to take her out. They were married that following Summer on June 23, 1945. When the war ended, Ray returned to America and Eileen came over by boat, docking in New York City on March 17th, 1946. She then took the train to Iowa, remembering seeing the most beautiful sunset the day she arrived. Ray and Eileen first lived on a farm in Iowa where Ray worked. A year later they moved to Waterloo, IA where Ray got a job at John Deere and Eileen at Rath Packing. They would later have two daughters, Christine and Kathy. From there they had three granddaughters and many great-grandchildren. Eileen was predeceased by her husband, Ray Gibson, her daughter Christine Gibson, her mother, father, stepfather, two brothers and sister. She is survived by her daughter and son-in-law: Kathy and Jim Koeppel, of Waterloo, IA. She leaves behind her three grandchildren: Lisa, Jamie (TJ) Sara (Scott); and eight great-grandchildren: Kayla, Ray, Dade, Natalie, Vince, Logan, Ryan, and Millie. She also leaves many other dear friends who will sadly miss her. Gathering of family and friends will be from 5 to 7 p.m. Monday, May 23, 2022, at the Richardson Funeral Service in Cedar Falls, with private interment in the Fairview Cemetery in Cedar Falls. In lieu of flowers, the family requests that donations be made to Cedar Valley Hospice. We will miss Eileen dearly, but we are so grateful for the time we had to spend with her. We will remember Eileen for her loving nature, gentleness, and her wonderful stories. We will always feel her presence in our hearts.

Eileen Gibson was a beloved wife, mother, grandmother, and friend during her incredible 96 years of life. She passed away peacefully at her home Tuesday, May 17th, 2022. Eileen had a long and full life. She was born on February 18, 1926, in... View Obituary & Service Information

The family of Eileen Gibson created this Life Tributes page to make it easy to share your memories.

Eileen Gibson was a beloved wife, mother, grandmother, and friend...

Send flowers to the Gibson family.