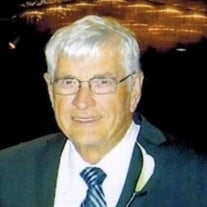 Eldon F. Hayes, 88, of Cedar Falls, passed away May 28, 2022 at the Western Home Communities-Deery Suites. Eldon was born June 28, 1933 in Cottonville, Iowa, the son of Clare and Mary Isabelle (O’Rourke) Hayes. He attended Jackson County Public Schools until they left the farm. He then attended Holy Rosary School in LaMotte, Iowa, graduating in the class of 1951. He worked at the Adams Manufacturing Co. until he was drafted into the Army in 1954. He spent his service time in the 586th ordinance Co. in Orleans, France and later was honorably discharged in 1958. He was then employed at Rainbo Tire Co in Dubuque until the family moved to Cedar Falls in 1963. He worked for various tire companies until 1974 when he went to work for John Deery Motors, retiring in 1998. In his semi-retirement, he became the Administrative Assistant for the Iowa Knights of Columbus for seven years. He married Winifred "Winnie" Grace August 23, 1958 at St. Patrick Catholic Church in North Garryowen, Iowa. She died April 25, 2017. They had four children, John Vincent, James Eldon, Michael Edward and Mary Margaret. He is survived by his children, John (Jeannine), James (Sarah), Michael (Kari), and Mary Cory (Rodney); nine grandchildren; and three great-grandchildren. He was preceded in death by his parents; two sisters, Arlene Grobstich and Dorothy Fury; brother, Marvin and a grandchild, Daniel. Mass of Christian Burial will be 10:00 a.m. Friday, June 3, 2022 at St. Patrick Catholic Church in Cedar Falls, with inurnment at a later date in Greenwood Cemetery. Visitation will be from 4 to 7 p.m. Thursday, June 2, 2022 at the Richardson Funeral Service where there will be a 4 p.m. Rosary and a 6:45 p.m. Vigil. Memorials may be directed to St Patrick Catholic Church or Western Home Communities. The family wishes to thank the staff of Western Home for their tender care and important mission.

The family of Eldon Hayes created this Life Tributes page to make it easy to share your memories.

Send flowers to the Hayes family.