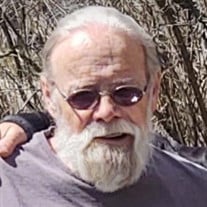 JANESVILLE – Emery Lee Griffith, age 78, formally of Cedar Falls, died Saturday, October 16, 2021, at Waverly Health Center in Waverly, Iowa. He was born November 24, 1942, in Cedar Falls, the son of Arnim and Ethel (Garrison) Griffith. He graduated from Cedar Falls High School in the class of 1961. Emery served in the US Army. On December 28, 1974, he was united in marriage to Delaine “Sue” Hildebrand. She preceded him in death on June 16, 2020. He retired from John Deere Engine works in 1998. Following retirement he worked as a security guard for Pinkerton/ Securitas for Viking pump of Cedar Falls and Nestle of Waverly and briefly at Kwik Star of Janesville Survived by his two sons, Josh Griffith of Janesville, and Ed Griffith of Waterloo: two grandchildren, Emerson and Raine of Cedar Falls, and a brother, Kenny (Jan) Griffith of Des Moines. Preceded in death by his wife, a daughter, Dannette Hildebrand, a sister, Mary Griffith Bahlmann; two brothers, Lonnie Griffith and George Griffith, in infancy. Memorial services will be 10:30 am Saturday, October 30, 2021, at Richardson Funeral Service in Cedar Falls. Visitation will be one hour prior to the service. Memorials may be directed to the American Cancer Society. Online guestbook at www.richardsonfuneralservice.com.

The family of Emery Griffith created this Life Tributes page to make it easy to share your memories.

Send flowers to the Griffith family.