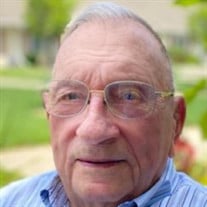 Eugene F. (Gene) Puetz of Cedar Falls, Iowa, passed away on August 29, 2021 at the age of 100. Gene was born in Merrill, Iowa, on September 12, 1920, to John and Margaret (Hoss) Puetz. After his mother died, his father married Emma Freking, who cared for the four young children. After graduating from Merrill High School, Gene worked with his father in farming until he joined the Navy in 1942. He got his wings and commission as Ensign Naval Aviator just before World War II ended in 1945. On November 3, 1945, he married a classmate he met in first grade, Margaret (Marge) Nemmers. They raised six children, three boys and three girls, and farmed in the LeMars, Iowa area. Then Gene transitioned to a full time career in marketing agricultural products in northwest Iowa and nearby states. He was well known for his outgoing personality and dedication to his work. During that time he lived in Spencer, Iowa, and was active in church activities: Cursillo, Marriage Encounter, Renew and Knights of Columbus. After retiring, Gene and Marge moved to Prescott, Arizona, in 1993. He enjoyed fishing, golfing, playing cards and cribbage, and visiting friends. After Marge’s death in 2000, Gene decided to move back to Iowa to be closer to family. He moved to Windcove Retirement Community in Cedar Falls, Iowa, in 2004. There he met LaVerne Chang and married her on September 12, 2009. They enjoyed cultural events and traveling. Gene was a member of St. Patrick Catholic Church in Cedar Falls. Gene is survived by his wife LaVerne; three sons, Daniel Puetz and wife Gerrie Hartman of Palatine, Ill., Fred (Rose) Puetz of Omaha, Neb., and John (Melissa) Puetz of Temecula, Calif.; and two daughters, Nancy (Galen) Marsh of Livermore, Calif., and Barbara Goergen and husband Tom Flagg of Waynesville, N.C. Also surviving are his sister Maxine Schnepf of Omaha, Neb., son-in-law Perry Krieger of Cedar Falls, stepson David Chang of Baltimore, Md., step-daughter Lisa Chang and husband Bryan Berger of Charlottesville, Va., 13 grandchildren, 17 great-grandchildren, and one great-great grandson. Preceding Gene in death were his daughter Constance Krieger of Cedar Falls, brother Evon Puetz and sister Harriet Langel, both of LeMars. Services with military honors will be held at the National Memorial Cemetery of Arizona in Phoenix later in the fall. In lieu of flowers, please make a donation to the charity of your choice.

Eugene F. (Gene) Puetz of Cedar Falls, Iowa, passed away on August 29, 2021 at the age of 100. Gene was born in Merrill, Iowa, on September 12, 1920, to John and Margaret (Hoss) Puetz. After his mother died, his father married Emma Freking,... View Obituary & Service Information

The family of Eugene F. Puetz created this Life Tributes page to make it easy to share your memories.

Send flowers to the Puetz family.