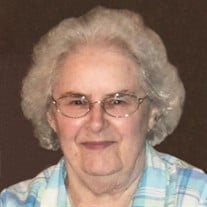 Evelyn Faye Brecunier (1929-2019) CEDAR FALLS – Evelyn Faye Brecunier, 89, of Cedar Falls died Wednesday, February 6, 2019 at the University of Iowa Hospitals and Clinics, Iowa City. She was born October 17, 1929, in Grundy County, Iowa, daughter of Herman and Jenny (Harrenstein) Boike. She married Robert I. Brecunier on November 26, 1948 at the Little Brown Church in Nashua, Iowa. He preceded her in death on August 6, 2018. She was a homemaker; had an independent postal route; and managed the office at Car-vets Sales and Service in Waterloo, which she owned with her husband, until they retired in 1994. Survived by: four sons: Larry of Cedar Falls, Douglas of Waterloo, Bret of Frederika, and Stuart (Angie) of Dunkerton; 16 grandchildren; 16 great grandchildren; and one brother, Norman (Greta) Boike of Waterloo. Preceded in death by: two brothers, Roger and Russell Boike; two sisters, Carol McGrane and Betty Graybill. Services: 11:00 a.m. Monday, Feb. 11th at Richardson Funeral Service with burial in Cedar Valley Memorial Gardens, both in Cedar Falls. Visitation from 5 to 7 p.m. Sunday at the funeral home and for one hour prior to the service. Evelyn was an amazing cook. Whether you were good or bad you always got dessert. She always put family first before her own needs; was on top of her game, doing crosswords, sudoku, and the ultimate champion at wheel of fortune. She taught us so much and will live on in all of us.

The family of Evelyn F. Brecunier created this Life Tributes page to make it easy to share your memories.

Send flowers to the Brecunier family.