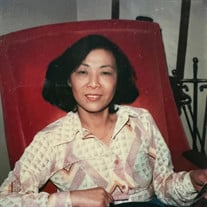 Evelyn (Poshin) Chien passed away on December 4, 2021 at the age of 95. She is survived by four sons: Larry of Cedar Falls, Iowa, Kirby of Portland, Oregon, Daniel (Kin) of Franklin, Michigan. and Walter (Kim) of Tacoma, Washington. Ten grandchildren: Kelly Huck (Josh) of Waterloo, Kristin of Cedar Falls, Seanie of Portland, Timothy of Seattle, Michael of Detroit, Christine of Detroit, Kevin of Chicago, Jessica of Beijing, China, Julian of Berkeley and Drake of Bellevue. And three great-grandchildren: Audri Huck of Waterloo, and Madison and Clint Philip of Cedar Falls. She is preceded in death by her husband Ting Chien (1912 - 1981) and her eldest son, Philip (1951 - 2017). Evelyn was born as Chang Poshin on June 3, 1926, in Nanjing, China. She was the first of eight children - six girls and two boys. When she was ten years old, her father decided to move his family to Chongqing in central China in an effort to shield them from the horrors of the Second Sino-Japan War raging in Nanjing and eastern China. In her late teens, the family moved to Quizhou in southern China where her father was appointed president of the New Provincial National University. In 1943, at the age of 16, Poshin skipped her senior year of high school to attend her father’s university, majoring in Chemistry. With the repeal of the Chinese Exclusion Act in 1943 and the surrender of Japan at the end of the Second World War in 1945, Carleton College in Northfield, Minnesota offered Poshin a full-ride scholarship so she could finish her degree in Chemistry in the United States. In 1946, her father bought her a ticket on a recommissioned WWII ship bound for Oakland, California, after which she got on a train to Omaha. Poshin was part of a new wave of elite exchange students with a mission to rebuild modern China through western education. She was 20 years old and on her own. After she arrived at Carleton, her professor gave her the name Evelyn, which took some getting used to. But she knew some English and integrated well with the other students, graduating with a bachelor's degree in Chemistry in 1948. She soon landed a job working in the laboratory of the Mayo Clinic in Rochester, Minnesota. At this time, she also met her future husband, Ting Chien, who was a graduate student of the University of Minnesota. 1949 was a tumultuous year. Mao Tse Tung and the communists had captured China making both Evelyn and Ting’s safe return very much in doubt. Like many other Chinese students, they made the difficult decision to stay in the United States. Ting graduated that same year and they married in Rochester on Sept 23, 1950. They welcomed their first child, Philip Minng, in 1951. Ting was hired at the Rath Packing Company as a research chemist and they moved to Waterloo, Iowa in 1953. They received permanent resident status as “displaced citizens” in 1955 and then moved to a quiet street in Cedar Falls. Evelyn would later work for over 25 years as a chemist at Allen Memorial Hospital. By 1973, Ting and Evelyn would finally gain their U.S. Citizenship. Evelyn would eventually raise her five boys on Neola Street and it would remain her home for over 63 years even after they had all left. She never wanted to live anywhere else. Evelyn had a love for the game of bridge and she soon became an active member of the American Contract Bridge League. She competed in many local, regional, and national tournaments and quickly gained Master Status. In the early 1980s, after forty years away, her hometown in China welcomed her back as an honored guest returning from the West and she was able to have a friendly game of bridge with some of her old classmates. Back in Cedar Falls, Evelyn wanted her five boys to know what real Chinese food was all about so she taught herself how to make many of her favorite dishes from back home. She became so good at it that word spread to the local community college and they asked her to teach a class on Chinese cuisine. Later, she and a friend started a concession business selling fresh egg rolls and fried rice at local fairs. But most of all, she loved to cook because it brought people together. On many holidays, especially Thanksgiving, she would host four or five families at her house (as long as someone else did the dishes!). Everyone would hold hands, creating a line of people stretching throughout the house then someone would say a prayer before eating. Evelyn, Poshin, was finally able to bridge the East with the West in her own way. The family will host a celebration of her life in Cedar Falls in June 2022. They ask any donations to be sent to St. Paul Lutheran Church, 2812 Willow Lane, Cedar Falls 50613

Evelyn (Poshin) Chien passed away on December 4, 2021 at the age of 95. She is survived by four sons: Larry of Cedar Falls, Iowa, Kirby of Portland, Oregon, Daniel (Kin) of Franklin, Michigan. and Walter (Kim) of Tacoma, Washington. Ten grandchildren:... View Obituary & Service Information

The family of Evelyn Chien created this Life Tributes page to make it easy to share your memories.

Send flowers to the Chien family.