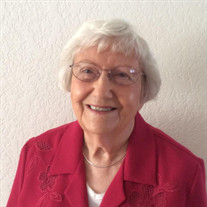 Florine (Erger) Rowe of Cedar Falls, was called to Heaven August 1, 2021. Beloved mother, wife, sister, grandmother, and friend, Florine was born Feb 20, 1932 in rural Walford, IA to Walter and Esther (Norland) Erger. She graduated from Walford High School in 1949. Florine attended Mt. Mercy College and Iowa State Teachers College (now UNI), after which she taught at Dunkerton, Forest City and Algona, IA. It was while teaching that she met and fell in love with fellow teacher, Clair Rowe. After their marriage, Florine & Clair moved to Muncie, IN. where their 3 children were born and she did substitute teaching. They lived in Muncie for 15 years, then moved to Grand Forks, ND for 15 years, finally retiring to Cedar Falls, IA in 1986. Florine was a member of many organizations including Catholic Daughters of America, a life member of Sartori Auxiliary, P.E.O. Chapter OJ, UNIC at UNI, St. Patrick’s Church and was an active community volunteer. She loved to entertain people and was happiest when hosting groups of friends and family. She was a wonderful neighbor and friend; always checking in to see how people were doing and what they might need. Florine will be remembered for her compassion and generosity. In December of 1993 Florine and Clair vacationed in Carpinteria, CA to spend time near their children and grandchildren. They loved the community so much they returned every winter for the next 25 years, hosting and making friends with people from across the nation and Canada. She is survived by her husband, Clair, her son Paul & wife Lynelle of Irvine CA; daughter Patricia McFarland & husband Loren of Santa Barbara, CA; daughter Janet Rowe & husband Dan Rhodes of Greenville, WI; grandchildren Shannon Sykes (Alex), Patrick Rowe (Lisa), & Keegan Rowe; Zachary McFarland & Nicholas McFarland; Tessa Rhodes and Noah Rhodes; great grandchildren Henley, Ian & Declan Sykes; Emmalyn & Lillian Rowe. Also surviving is her brother Kenneth Erger and sister-in-law Ann Rowe as well as many nieces and nephews. She was preceded in death by her parents and sister Rita Erusha and husband Donald, sister-in-law Ginger Erger, brother Donald and wife Mary. Memorial Mass for family and friends was held at St. Patrick’s Catholic Church, Cedar Falls, IA. Memorials may be sent to Catholic Daughters of America or St. Patrick’s Catholic Church in Cedar Falls, IA. Online condolences may be left at: www.richardsonfuneralservice.com.

The family of Florine Rowe created this Life Tributes page to make it easy to share your memories.

Send flowers to the Rowe family.