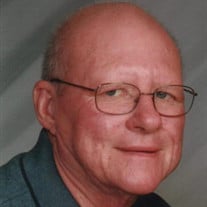 CEDAR FALLS – Gene O’Donald, 82, of Cedar Falls died on Friday, April 1, 2022, at Unity Point – Allen Memorial Hospital. He was born on August 6, 1939, in Springfield, Illinois, the son of Owen and Dorothy (Reeves) O’Donald. On August 6, 1961, Gene married Carol Ann White in Orion, IL. He graduated high school in Springfield, IL, and then attended Illinois State Normal University. During his career he worked as an accountant at Wayne Engineering in Cedar Falls and Triangle Plastics in Independence. Gene is survived by his wife, Carol, daughter, Beth (Shawn) Nerby and their children, Parker, Collin, and Hayden of New Braufels, TX; son, James (Beth) O’Donald and their two daughters of Georgetown, IN; and brother-in-law, Thomas (Florence) White of Geneseo, IL. A gathering of family and friends will be Saturday, April 2, 2022, from 2:00-4:00 p.m. at Richardson Funeral Service in Cedar Falls. Memorials may be directed to the family.

The family of Gene O'Donald created this Life Tributes page to make it easy to share your memories.

Send flowers to the O'Donald family.