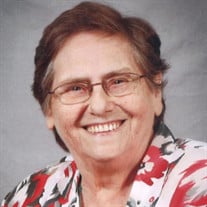 CEDAR FALLS – Harriett Jeverna Bullock, 90, of Waterloo, died on Thursday, April 7, 2022, at Pinnacle Specialty Care. She was born on June 18, 1931, in Cambridge, Iowa, the daughter of Ralph and Mable (Purvis) Severson. On June 17, 1950, Harriett married Sherman Jr. Bullock in Marcell, MN. He preceded her in death on December 4, 1965. She worked as a binder and collator operator at Graphic Forms Inc. in Nevada, IA, for 23 years before retiring in 1993. She enjoyed spending time with family and traveling to do genealogy research. She also enjoyed crocheting, knitting, including making prayer shawls for church, working on jigsaw puzzles, helping to deliver meals on wheels, and working at the local food bank with her church. She was a former member of the Rebekah Lodge, a cub scout den mother, and a member of First Presbyterian Church Cedar Falls and Esther Circle. She was also the first girls’ softball coach in Newton, Iowa, in the early 1960s. Harriett is survived by four children: Sherman (Anneen) Bullock Jr. of Riverview, FL, Jeverna (Tom) Mulligan of Waterloo, IA, Karen Bullock of Dow City, IA, and Gay Stumbo of Boone, IA; twelve grandchildren, and sixteen great-grandchildren, three great-great-grandchildren, sister-in-law, Annabelle (Carl) Springer; and many nieces, nephews, and friends. She was preceded in death by her husband, Sherman, a sister, Lillian Johnson of Terril, IA, and son-in-law, Mike Stumbo. Visitation will be 4:00-7:00 p.m. on Monday, April 11, 2022, at Richardson Funeral Service in Cedar Falls. A private graveside service will be 11:00 a.m. Tuesday at Woodlawn Cemetery near Maxwell, IA. In lieu of flowers, memorials may be directed to the American Diabetes Association, the Alzheimer’s Association, or First Presbyterian Church Cedar Falls.

The family of Harriett Bullock created this Life Tributes page to make it easy to share your memories.

Send flowers to the Bullock family.