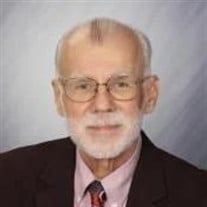 Dr. James (Jim) Gerald McCullagh died on April 27th, 2022 at Allen Memorial Hospital of heart failure. He was born on August 26, 1936 to James John McCullagh and Anna Patricia Rogers in New York City, New York where he grew up. His parents had emigrated from country Tyrone in Northern Ireland. Jim was a dual U.S. and Irish citizen. Jim served in the Army for 3 years in several locations including Germany and California. He attended Curry College in MA before graduating with a Bachelor’s degree in Philosophy from Chico State University of CA in 1963. He received a Master of Science in Social Work (MSSW) from University of Missouri-Columbia in 1970 where he met his wife Cheryl Ann Edwards, a Doctor of Education (Ed.D.) in Counseling from Northern Illinois University in 1979, and a JD University of Iowa in 1993. Jim worked as a welfare worker in San Francisco in the early to mid-1960s. Before coming to UNI, Jim was an assistant professor at the University of Kentucky. He, his wife, and their son moved to Cedar Falls in 1981. Jim was a professor of social work at the University of Northern Iowa from 1981 until he retired in 2021. He was honored with the Randy A. Fisher Lifetime Achievement award as well as a UNI regent’s award. His research focused on Native American Indians and their contribution to social work. During this process he made a life-long friendship with Howard Chandler Walkingstick who was a prominent Cherokee and social worker. As a part-time lawyer he focused on juvenile law in Cedar Falls and Waterloo. Jim was a member of St Stephens Student Center in Cedar falls where he volunteered as the sacristan for over a decade. Additionally Jim was a Benedictine Oblate. Jim loved to travel. He visited Europe many times including several visits with his family in Northern Ireland. He also visited the near east and Israel. In Israel he worked on a kibbutz for four months. Additionally Jim often travelled to Hilton Head with family and friends. Jim was an avid antique collector and deeply enjoyed puzzles and Sudoku. Survived by: son, James John, and his sisters Kay Wojnicki and Chris Cronin and their families. Mass of Christian Burial will 10:30 a.m. Wednesday, May 4, 2022 at St. Stephen The Witness Catholic Student Center in Cedar Falls. Visitation will be the following day, Thursday, May 5, 2022 at the Richardson Funeral Service from 4 to 7 p.m. Jim will be buried at St. Patrick’s Cemetery in Greencastle, Northern Ireland with his deceased wife Cheryl McCullagh.

The family of Dr. James G. McCullagh created this Life Tributes page to make it easy to share your memories.

Send flowers to the McCullagh family.