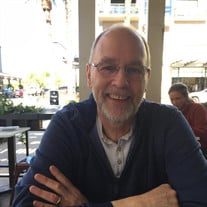 Jeffrey Allen Blank of Cedar Falls, Iowa passed away at home January 11, 2022 of cancer. Jeffrey was born in Watertown, Wisconsin on April 12, 1955 to Lorraine and Wilbert Blank. Jeff grew up on a dairy farm outside of Ixonia, Wisconsin. Jeff is survived by his sister, Barbara (Rob) Parkhurst of Cedar Park, Texas ; twin brothers Dan (Carla) Blank of Chatham, Illinois, and Dave (Kay) Blank of Ixonia, Wisconsin and many nieces and nephews, all of whom were precious to Jeff. Jeff is also survived by his wife of 25 years, Ruth Ann Shriver, of Cedar Falls, Iowa and her three daughters Carol Ann (Sam) of Urbandale, Iowa; Emily(Randy) Howe of Cedar Falls, Iowa and Rachel (Kevin) Busch of Urbandale, Iowa, and four grandchildren Ryan (Rachel) Anderson, Vinton, Iowa; Brady Anderson of Cedar Falls, Iowa and Valerie Ann and Benjamin Busch of Urbandale, Iowa. Jeff graduated from Oconomowoc High School, then went on to join the Air Force spending four years seeing the world from the air and land. He loved flying so much he eventually got his pilots license and started building his own airplane. A project he never finished largely because he was a devoted pastor and husband. He loved flying and continued to fly for fun. He was a member of Clayton Folkerts EAA Chapter Sk3. He and other members of his chapter organized a yearly teaching event at the Allison Airport to teach elementary students about flying and to give each child a ride in a small plane with the intention of encouraging them to love flying as much as they did! After the Air Force Jeff went back to school and graduated from Whitewater University In Wisconsin with a degree in Biology. But Jeff was called to serve God and he graduated from Warburg Seminary in Dubuque, Iowa and went on to serve the Evangelical Lutheran Church in America for almost thirty years serving parishes in Cokato, Minnesota; Lancaster, Wisconsin; Allison, Iowa and Waterloo, Iowa. Memorials may be made to the Allison airport and Unity Point Hospice. A service will be held sometime this summer at the family farm.

Jeffrey Allen Blank of Cedar Falls, Iowa passed away at home January 11, 2022 of cancer. Jeffrey was born in Watertown, Wisconsin on April 12, 1955 to Lorraine and Wilbert Blank. Jeff grew up on a dairy farm outside of Ixonia, Wisconsin. Jeff... View Obituary & Service Information

The family of Jeffrey Allen Blank created this Life Tributes page to make it easy to share your memories.

Send flowers to the Blank family.