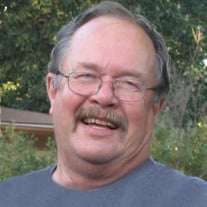 James “Jim” Barth (1946-2019) CEDAR FALLS – James “Jim” Barth, 72, of Cedar Falls died Wednesday, June 12, 2019, at his home. He was born December 28, 1946 in Decorah, Iowa, son of Harold and Helen (Thorson) Barth. He married Barbara Dettbarn on July 31, 1970 in West Des Moines, Iowa. He graduated from Orange High School (Waterloo) in 1965 and served in the U.S. Army during Vietnam. He was employed in assembly with John Deere for 38 years, retiring in 2003. Survived by: his wife, Barbara; three sons, Don (Kelly) Dettbarn of Underwood, Michael Barth of Cedar Falls, and David (Katie) Barth of Rochester, MN; three grandchildren, Reid Dettbarn, Rachel and Milo Barth; his mother, Helen Barth of Waterloo; a brother, Gary (Sue) Barth of Hampton; and a sister, Debra (Richard) Schroeder of Waverly. Preceded in death by: his father; a brother, Donald Barth; and a sister-in-law, Julie Barth. Memorial services will be held 2:00 p.m. Friday, June 21st at Richardson Funeral Service, with visitation for one hour prior to the service. Inurnment will be at a later date in the Iowa Veterans Cemetery. Richardson Funeral Service is assisting the family. Memorials may be directed to the family.

The family of Jim Barth created this Life Tributes page to make it easy to share your memories.

Send flowers to the Barth family.