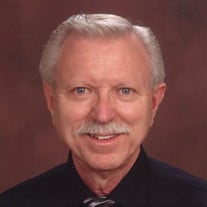 CEDAR FALLS – Henry Joseph “Joe” Hermanstorfer, 78, died Saturday March 5, 2022, at Bickford Cottage in Cedar Falls. He was born August 18, 1943, in Sigourney, IA, the son of William Laurel Henry and Ruth LaVonne Hobbs Hermanstorfer. He graduated from Ottumwa High School in 1961 and went on to serve in the United States Army. On October 26, 1961, he was united in marriage to Joyce Ann McMillin in Ottumwa. She died May 2, 2014. Joe was employed at KCRG as a Technician I for 19 years and then worked as a Broadcast Radio/TV Technician at the University of Iowa, College of Liberal Arts & Sciences Production Unit, retiring October 23, 2009. He was a former member of Calvary Baptist in Cedar Rapids, enjoyed riding the trails on bicycle, ham radio operator, leather crafter, avid photographer, and even tried sailing with the University of Iowa Sailing Club. Joe is survived by his daughter, Teri Jo (Ross) Stuckey; son, Todd (Bonita Streich and her children, Zach and Caleb) of Cedar Rapids; grandchild, Peyton Ross Stuckey; three brothers, Ray (Marty) of Arvada, CO; Larry (Dee) of Cedar Rapids, and Forrest (Cherry) of Mt. Pleasant; and many nieces and nephews. He was preceded in death by parents, wife, sister and brother-in-law, Debbie and Joe Greiner; and infant brother, Bernard. Funeral service will be 6:00 p.m. Thursday, March 10, 2022, at Prairie Lakes Church in Cedar Falls. Visitation will be two hours prior to the service. Burial will be 11:30 a.m. Friday at Agency Cemetery in Agency, IA. Memorial contributions may be directed to Unity Point Hospice of Waterloo.

The family of Joe Hermanstorfer created this Life Tributes page to make it easy to share your memories.

Send flowers to the Hermanstorfer family.