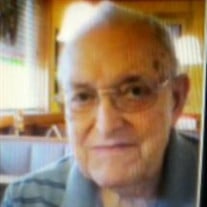 CEDAR FALLS - Joseph "Joe" Workman, 98, of Mason City, Iowa, formerly of Cedar Falls, went to be with his Lord and his wife, Bertha, on Sunday, March 8th following a life full of faith, family, and love. Joe was born in Malcom, Iowa, to parents Albert and Esther (Kelley) Workman, on November 21,1921. He grew up in Cedar Falls, Iowa. In 1941, Joe started working at Viking Pump. On December 31, 1941, he married the love of his life, Bertha Ann Marx, in Lancaster, Missouri. He enlisted in the U.S. Navy in 1942, spending the next three years working in a repair shop in Brazil. He returned to Cedar Falls and worked at Viking Pump. A daughter, Diane Marie, was born in 1946. During the Korean War, Joe was called into the Navy again. He was stationed in San Diego, California. His family moved there too. After his discharge they returned to Cedar Falls, with Joe returning to work at Viking Pump. A son, James Alan, was born in 1954. Joe moved up to supervisory positions, with his last position being in the Specialty Dept. at the South Main Street Plant. After 41 years with Viking Pump, he retired. Joe enjoyed playing golf and cards. He was active in his church as an usher for many years. Joe is survived his daughter, Diane Monroe; three grandchildren, Mike (Michelle) DeHart, Tim (Heather) DeHart, and Chad Workman; great grandchildren, Brittany (Jeremy) Bartling, Andrew and Joe DeHart, Kayla DeHart, Mason Hatfield, Ady and Tucker Workman; twin great-great granddaughters, Charlotte and Savanah Bartling; and many nieces and nephews. He was preceded in death by his wife and son. Joe had a beautiful ginger cat, Sunshine. They were best friends with Sunshine taking a nap on his lap for as long as two hours. She would leave a toy mouse in his bedroom and in the kitchen over night. Services will be held at 11:00 a.m. Saturday, March 14th at Richardson Funeral Service with burial in Fairview Cemetery, both in Cedar Falls. Visitation from 9:30 a.m. until service time at the funeral home. Military Honors will be conducted by the Cedar Falls AMVETS Post 49 Honor Guard and the U.S. Navy Funeral Honors Detail.

CEDAR FALLS - Joseph "Joe" Workman, 98, of Mason City, Iowa, formerly of Cedar Falls, went to be with his Lord and his wife, Bertha, on Sunday, March 8th following a life full of faith, family, and love. Joe was born in Malcom, Iowa, to parents... View Obituary & Service Information

The family of Joseph W. Workman created this Life Tributes page to make it easy to share your memories.

Send flowers to the Workman family.