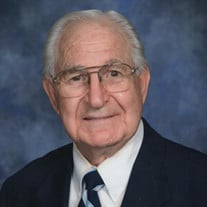 CEDAR FALLS – Dr. Karl A. Bottke, 98, of Cedar Falls, died Saturday, March 12, 2022, at his home. He was born February 25, 1924, in Iowa Falls, Iowa, the son of Otto and Anna (Cupcheck) Bottke. He graduated from Iowa Falls High School and served in the United States Navy from 1942 to 1944. Following graduation from Ellsworth Community College, Karl earned his DDS from the University of Iowa College of Dentistry. In September of 1952, he was united in marriage to LaVerne Baer in Haysville, IN. She preceded him in death in October of 1987. Karl served the Cedar Valley as a dentist at his private practice, Cedarloo Dental, until his retirement in 1984. Karl was honored to have volunteered many years for the Black Hawk County Health Department’s Children’s Dental Sealant program working to prevent childhood cavities. Karl was a member of Nazareth Lutheran Church. He was also very active in the American Red Cross and went on several mission trips to Jamaica. He is survived by two sons, Dr. David (Rhonda) Bottke of Cedar Falls, and Dr. Craig (Terri) Bottke of Burlington; four grandchildren, Benjamin Bottke of Cedar Falls, Brooke (Brian) Baird of Cedar Falls, Dr. Brian (Alexa) Bottke of Peoria, IL, and Michael Bottke of Cedar Rapids; and four great-grandchildren, Noah, Otto, and Arlo Bottke and Bella Kolpek. Karl was preceded in death by his wife, LaVerne; two brothers, Marvin and Paul Bottke; and a sister, Gloria Beer. Funeral services will be 10:30am Tuesday, March 15, 2022, at Nazareth Lutheran Church in Cedar Falls. Visitation will be from 4-7pm Monday at Richardson Funeral Service in Cedar Falls, and also one hour prior to the service at church. Interment with military honors will be in St. Paul Lutheran Cemetery, Haysville, IN, at a later date. Memorials may be directed to Friends of the Redeemer, a Jamaican non-profit at https://www.friendsoftheredeemer.org or the American Red Cross.

The family of Dr. Karl A. Bottke created this Life Tributes page to make it easy to share your memories.

Send flowers to the Bottke family.