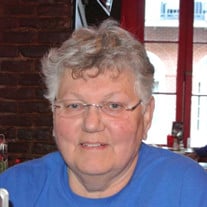 Kathryn Elaine Domek (Johnson), born June 8, 1943 in Fairmont, Minnesota, to Clyde and Martha (Lantz) Domek, died January 16, 2022 at the Derry Suites, Western Home Communities. A former Assistant Principal at East High School, Waterloo, Kathryn spent her early years in Ohio, Colorado, and Minnesota. Her father left for service in the Army during WWII, shortly before her birth. She and her mother relocated to Cleveland, Ohio to stay with family during her first two years. It was not until her father was honorably discharged and returned stateside in 1945 that she met him. The re-united family moved from Colorado to Minnesota where she spent her early years. She began her higher education pursuits in Physical Education at Mankato State College, participating in athletic competition and the Marching Band. When the family moved to Ames, Iowa, at the end of her first year, she followed them and enrolled at Iowa State University. Unfortunately, women were not allowed to join the marching band nor participate in university sponsored sport competition. However, she was allowed to join the ISU Rifle team. She was also able to continue her studies in Physical Education, becoming a member of the first class of women physical educators who graduated from ISU in 1965. She began her teaching career in Grundy Center, where besides teaching she coached and drove the school bus. During this time, she attended summer classes at the University of Northern Iowa which resulted in her attaining a Master of Education degree. She also completed doctoral course work at Drake University. She met and married her husband, Claire Johnson and relocated to Iowa City. Claire was in the Army during the Vietnam War and Kathryn taught at the UI Lab School, pursuing her Administration certificate. The marriage ended in divorce, but Kathryn kept her married name for professional reasons. After teaching positions in Newton, IA., and La Crosse, WI, Kathryn accepted a principal’s position in Ames, IA. That led ultimately to her accepting a position with the State of Iowa as Superintendent of Grounds. In that position, she oversaw the remodeling of State buildings such as prisons and state schools and ultimately the State Capitol including the gliding of the Capitol Dome. In appreciation of her work, the Dome was lit at night on her birthday at the completion of the restoration. Kathryn left service with the State government in the 1980’s relocating to Waterloo, IA. where she was a principal at Logan Middle School and then went on to become one of the split appointment Assistant Principals at East and West High School. After two years, she transitioned from the split appointment into a full time Assistant principalship at East High. She retired in 2008. Kathryn loved to travel, camp, and golf as well as play bridge throughout her life. She was an avid sports fan, always true to her beloved Cyclones and Vikings and a supporter of UNI teams. She was a lover of animals, especially her dogs Cubby, Ripley, and Fiona as well as cats, Button and Patches. Kathryn is survived by brothers, Lance (Katie) of Marion, IA. and Thomas of Ames, IA; aunt, Sara-Irene (Jack) Painter of Cleveland, OH.; cousin, Jane (Ed) Bath of Montecita, CA.; nieces Sylvia (John) Blaha of Marion and Liza Domek of Ames; as well as grandnieces/grandnephews. She will be greatly missed by all who knew her including close friends, Mary (Meg) Heatley and Rachelle Fink, and her bridge partners, Ollie Peterson, Susan Hudson, and Sandra Williamson. In lieu of flowers, please direct any memorial gifts to either the Cedar Bend Humane Society, Waterloo, IA., or Women Athletics – c/o Iowa State University Foundation, Ames, IA.

The family of Kathryn E. Domek created this Life Tributes page to make it easy to share your memories.

Send flowers to the Domek family.