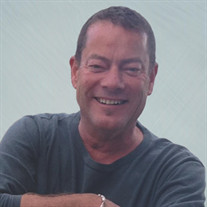 Cedar Falls – Lance L. White, age 55, of Cedar Falls, died Friday, September 20, 2019 at MercyOne Cedar Falls. He was born June 6, 1964, the son of Dick and Barbara (Bacon) White in Portland, OR. He graduated from Cedar Falls High School in the class of 1983. He worked for Jerry Steward Trucking, and then Cedar Valley Freightliner which became Harrison Truck Centers as a parts salesman. He later worked as a journeyman electrician for Cedar Valley Electric. At the time of his death he was an independent contractor. He is survived by: his father, Dick (Chris) White of Cedar Falls; his mother, Barbara Cook of Portland, OR; two brothers, Mark (Jill) White of Waterloo, Troy (LeVonne) White of Cedar Rapids; two sisters, Sheenu (Aaron) Burtis of Madison, WI, Monique Cook of Waldron, AR; his best friend, Chris Meacham; and many nieces and nephews. A celebration of life will be 11am Thursday, September 26, 2019 at Richardson Funeral Service in Cedar Falls. A gathering of friends and family will be from 4-7pm Wednesday, at the funeral home. Memorials may be directed to the Cedar Falls AMVETS Post #49. Condolences may be left online at www.richardsonfuneralservice.com Lance loved the outdoors, camping, kayaking, skiing and trips to his native Oregon. He was an avid Iowa Hawkeyes, Oakland Raiders, and NASCAR fan.

The family of Lance L. White created this Life Tributes page to make it easy to share your memories.

Send flowers to the White family.