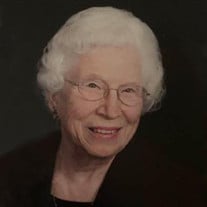 Luella Gladys Schuler, 98, formerly of Cedar Falls, Iowa died Thursday, April 14, 2022, at Brookdale Assisted Living in Pearland, TX. She was born on July 4, 1923, in Stillwater, Minnesota, the daughter of Harry and Martha (Christensen) Smith. Her parents moved to Cedar Falls, Iowa when she was six years old. She went to the elementary school associated with the Iowa State Teachers College and graduated from its affiliated high school in 1941. She then received her bachelor’s degree from Iowa State Teachers College. She taught English and Drama in Geneva, Iowa where she met her husband to be. She married Warren Schuler on August 24, 1947 at the Little Brown Church in Nashua, Iowa. Luella then spent a short time teaching in Dike, Iowa. She became a full time stay-at-home mother until her children were older. She then went back to school to get certified in Special Education and worked as a Special Ed teacher for West Waterloo Junior High in the Waterloo Community School District until she retired. After her retirement, she also worked for Congdon’s Printing and Imaging for several years. Luella grew up at Calvary Baptist Church and was an active member of the First Baptist Church during her marriage and the Trinity Bible Church after her husband’s death. She was also a member of the Red Hat Society and the Cedar Falls Rebekah Lodge for a number of years. As a graduate of what would become the University of Northern Iowa, she was a spirited Panther fan. She lived in the New Aldaya Lifescapes facilities in Cedar Falls for several years until she moved to Texas to live with her son and his family in 2018. She had only been in the assisted living facility in Pearland, Texas since October of 2021. At the age of 98, she was ready to go home to be with Jesus and her husband. Luella was preceded in death by her husband on May 7, 2003, her parents, her granddaughter Theresa Mora, and son-in-law William McCracken. Luella is survived by her daughter, Sharon McCracken of Westminster, CO and son, Douglas (wife Joyce Hazlewood) Schuler of Friendswood, TX; three granddaughters and one grandson: Lianne McCracken (husband Steven) Lowder of Westminster, CO; Sara Schuler (husband Doug) Beikman of Linn, KS; Stephen (wife Carla Crawford) Schuler of Abita Springs, LA; Stacy Schuler (husband Daryl) Blackmon of Friendswood, TX; and eleven great-grandchildren: Rebecca, Madison, Grace, Doug, Faith, Ben, Makenna, Hope, Ayda, Brayden, and Cayla. Funeral service will be Saturday, April 30, 2022, 10:30 am at Trinity Bible Church in Cedar Falls. Visitation will be Friday April 29th from 4:00 to 6:00 pm. Interment will be at Cedar Valley Memorial Gardens in Cedar Falls. Memorials may be directed to the family. Online guestbook at richardsonfuneralservice.com.

The family of Luella Schuler created this Life Tributes page to make it easy to share your memories.

Send flowers to the Schuler family.