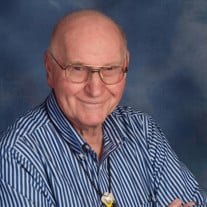 Lyle David Guldager February 21, 1934 - January 16, 2022 Lyle Guldager, 87, died at home, Sunday, January 16, 2022, following a battle with cancer. He was surrounded by his family. Lyle will be dearly missed by his family and friends and will live forever in our hearts. Visitation and funeral service will take place at Richardson Funeral Service in Cedar Falls, IA on Saturday, January 22. Visitation 11:30am-1:30pm, Service 1:30pm immediately followed by the committal service at Greenwood Cemetary, Cedar Falls, IA. Lyle David Guldager was born February 21, 1934, Cedar Falls, IA, to Godfrey and Juanada (Groesbeck) Guldager. His family lived on a farm west of Cedar Falls. They raised dairy cattle, beef cattle, hogs, and chickens, and grew corn and soybeans. In 1944, Lyle joined 4-H as a member of the Black Hawk Township. He refers to his years in 4-H as a youth as the “Golden Years” of 4-H. His prize project was showing Holstein. Lyle stayed involved in 4-H until the time of his death. Lyle graduated from Teachers College High School, Cedar Falls, IA, in 1952. Following graduation, he enlisted in the United States Army. He attained the rank of SP2(T) while stationed in Washington, D.C. Lyle was very proud of his military service and has been known to say he wished he had stayed in longer. At the time of his passing, Lyle was the owner of 1st Class Lighting (a commercial lighting company he started in 2000). His previous employment included being a school bus driver, route driver for Daisy Dairy, owned a portable feed-grinding truck/business, was the maintenance specialist for the Cedar Falls Lutheran Home, was a traveling salesman for Waterloo Heating and Cooling and Winter Bottom Supply, and drove charter buses for groups throughout the United States. Though he enjoyed these jobs, he found his greatest satisfaction in being a farmer. Through this, he became infatuated with his father’s Farmall International Harvester tractor. Lyle bought the tractor, had it fully restored, and was so proud of it. Local city festival parades–from Cedar Falls to Independence–and the annual Old-Timer Power Show held at Antique Acres were his favorite places to show it off. For many of those parades, Lyle pulled the 4-H Club floats. It was a perfect match!! Lyle loved to travel as evidenced by some of his employment choices. However, most of his travels were for more personal reasons–revisiting his parents’ childhood homes, showing his children where he was stationed while in the service, keeping in touch with extended family, meeting former President and Mrs. Carter in Plains, GA, etc. Every trip had a purpose and through those travels and the people he met and connected with he learned it was a very small world! Lyle was united in marriage to Carol (Sampson) Kelley in 1958; they later divorced. Lyle was married and divorced three other times and remained unmarried until the time of his death. Lyle became a member of the Cedar Valley Unitarian Universalists in 2015, most recently serving on the board of trustees and a member of the building and accessibility committees. Lyle was baptized and confirmed at Bethlehem Lutheran Church, Cedar Falls, IA. He’s always had a strong commitment to church–regardless of the doctrine. Lyle became wholeheartedly involved in the church–he was not a “pew sitter.” Lyle is survived by his children Yvonne “Toni” (Les) Akers, Tammy (Dan) Bern, Tim (Aracelly) Guldager, Lynne Guldager, Gloria (Scott Smith) Guldager, and David (Nicole) Guldager. Grandchildren Joe and Jamey Akers; Miles and Taylor Bern; Sherrie Castillo, Cindy Childers, Kristi Salazar, Jean Martinez, and Diana Guldager; Robert Rooff and Randall Crane; Benjamin and Carlton Smith; Connor and Logan Guldager, Kyle, Hunter, Jack, and Grace Maitland. Great-Grandchildren Alayna and Gavin Akers; Evelyn and Vivienne Bern; Antonio, Mariah, and Nicholas Castillo, Jessica Campuzano, Brandon, Madison, Ashley, Samantha, and Isabella Soto; Rylan and Malia Rooff, Braxton and Charlee Crane; Adalee Kopsa. He is also survived by his Aunt Gloria Gene Snow, many cousins, and more friends than we can count. Lyle was preceded in death by his parents and his sister, Rev. Joyce Ruth Guldager. Lyle was a very loving, caring, and hard-working man. He supported and took great interest in his children, and their children and grandchildren in all of their endeavors. He took joy in meeting and connecting with people in all walks of life. Lyle loved watching the change of the seasons–especially how things were growing in the fields. He enjoyed music, especially listening to the Cedar Falls Municipal Band and the UNI Glee Club. Lyle also enjoyed weekly movies, theater productions, and loudly cheered the UNI Panthers and the Iowa Hawkeyes. No day for Lyle was complete without his coffee and donut from his local Casey’s, visiting with friends at Cedar Falls Hy-Vee, and enjoying a meal at Cedar Falls Village Inn. Of course, he also had his daily crossword, jumble, cryptoquip and sudoku puzzles he had to complete!! All of us have learned so much from him and will miss his stories of “how it used to be.” Memorials may be directed to the family. The family of Lyle Guldager would like to thank UnityPoint Hospice, physicians and nurses at UnityPoint Health and MercyOne, MercyOne Waterloo Cancer Center, Pastor Emma Peterson and the Cedar Valley Unitarian Universalist community, Rev. Kent Matthies, Black Hawk County 4H, Richardson Funeral Service and all of the many family, friends, and business associates that have supported Lyle and the family.

The family of Lyle D. Guldager created this Life Tributes page to make it easy to share your memories.

Send flowers to the Guldager family.