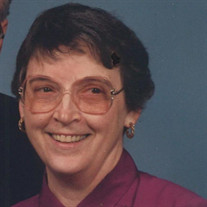 CEDAR FALLS – Martha C. Anderson, 89, of Cedar Falls died Sunday, December 13th at Pinnacle Specialty Care due to Covid-19. She was born October 15, 1931 in rural Tracy, Iowa, daughter of Kerns and Dottie (Rankin) Applegate. She graduated from Attica Consolidated School and married Eugene R. Anderson on June 23, 1956 in Attica. He preceded her in death on August 3, 1998. Martha was employed in the Rod Library at the University of Northern Iowa for 31 years. She was a member of First United Methodist Church in Cedar Falls, where she was a greeter with her husband for many years, a member of Women’s Society, and various circles. Survived by: two sons, Steven (Michelle) Anderson of Champaign, IL, and Jim Anderson of Waterloo; five grandchildren: Colin (Deidre), Jarrett, Aaron, Wesley, and Amy Anderson; three great grandsons, Jack, Oliver and Noah Anderson; a sister, Evelyn Smith, and a brother, John Applegate, both of Knoxville, IA. Preceded in death by: a son, John Anderson; four sisters, Louise, Phyllis, Naomi, and Frieda; and two brothers, Junior and Bill. Inurnment in Indiana Chapel Cemetery, rural Attica. Memorials may be directed to the family.

The family of Martha C Anderson created this Life Tributes page to make it easy to share your memories.

Send flowers to the Anderson family.