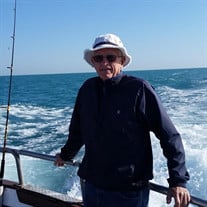 Waterloo – Maurice Edwin White, age 87, passed away Monday, January 24, 2022 at his home in Tucson, AZ of a heart attack. He was born on March 9, 1934 in Dumont, Iowa, the son of Clifford and Hilda (Ahrens) White. Maurice graduated from New Hartford High School in New Hartford, Iowa. 1958 he married Doneta Fairholm, and together they raised a daughter, Cheryl. They later divorced. Maurice worked as Project Superintendent for Lockard Construction Co for many years and was involved in the building of numerous commercial buildings both in the Waterloo-Cedar Falls area and in Tucson, Arizona. Most particularly the previous Married Student Housing at UNI, Drexel Elementary School in Tucson and two engine shops at the Air National Guard in Tucson. He will be remembered for his beautiful handmade mesquite furniture and all the projects he was happy to do for friends and family. On September 27, 2013, Maurice was united in marriage to Elaine Schares in Waterloo, Iowa. He is survived by: his wife, Elaine White of Waterloo; his daughter, Cheryl Christianson of Minneapolis; two grandsons; Tyler (Carissa) Christianson of Mankato, and Reece Christianson of St Paul; a brother, Paul (Lisa) White of Cedar Falls; a sister, Linda (Don) White of Tarkio, MO; step children: Kerri (Mark) Becker of Waterloo, Kim (Tracy) Even of Jesup, Iowa and Kevin (Lori) Schares of Independence, Iowa, three grandchildren and numerous nieces and nephews. He was preceded in death by: two sisters, Maurine Jaquis and Kay White; and a brother, Dennis in infancy. A celebration of life will be planned in the late spring in the Cedar Valley. Memorials may be directed to the family. Online guestbook is available at www.richardsonfuneralservice.com

Waterloo &#8211; Maurice Edwin White, age 87, passed away Monday, January 24, 2022 at his home in Tucson, AZ of a heart attack. He was born on March 9, 1934 in Dumont, Iowa, the son of Clifford and Hilda (Ahrens) White. Maurice graduated from... View Obituary & Service Information

The family of Maurice Edwin White created this Life Tributes page to make it easy to share your memories.

Send flowers to the White family.