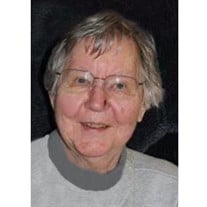 Nancy Bishop was born April 20, 1927, in Elizabeth, New Jersey, the youngest of four daughters of Alfred and Gladys (Stanford) Bishop. Alfred was a bakery supply salesman and staunch member of the Second Presbyterian Church. Nancy grew up in a middle-class milieu, romanticizing the robber baron Leland Stanford branch of her family but also absorbing the racial and religious tolerance of her father, which seemed both pragmatic and heartfelt. She graduated from Bucknell College in 1949 and married Bill Douglas that year. He was from a poorer family but ambitious in a technical way, and as an electrical engineer soon landed a job with Westinghouse in Pittsburgh. She worked as a social worker until her first child was born in 1951. After Bill was transferred to Sharon, PA in 1953, he encountered religious and moral challenges. His Baptist preference gave way to Nancy’s instinctive Presbyterianism, and he began to wonder if working on sonar for the military was what he wanted his legacy to be. In 1956 he entered seminary in Pittsburgh Xenia Seminary, and Nancy with two children under five found herself shoveling coal in an ancient parsonage in Plain Grove, PA. Graduating in 1959, Bill and Nancy volunteered for missionary service. They embarked for Brazil on January 1, 1960. After serving in Mutum, Mato Grosso, their missionary career was cut short by a change in mission policy, and they returned to the States in 1962, with another child. They spent six years at a National Mission bi-cultural church in El Paso, Texas; then move to Gibson, Iowa, and then to Albia where they served small Presbyterian churches. Another move back to Texas, this time to Arlington, where Nancy worked as an interlibrary loan librarian at the University of North Texas Health Sciences Center, Fort Worth. Nancy and Bill were active at First Presbyterian Church, Arlington, Texas. They both sang in the choir, faithfully, for thirty years. Nancy was an ordained Elder in the PCUSA. After retirement they moved to the Reserve on Walnut Creek in Urbandale, Iowa. Bill died in 2009. Nancy thrived at the Reserve until dying friends, failing eyesight, and failing memory caught up with her. She is survived by her sons Bill R. of Des Moines and Andy of Iowa City and daughter Sue Feltman (Dave) of Waterloo, and grandchildren Peter Feltman of Oakland, CA, Sarah Hegar (Trey) of Mt. Pleasant, and Rachel Murray (Jeremy) of Waconia, MN, and great-grandson Hudson Hegar. Nancy had an unshakeable belief in heaven that serves for those who knew her as impressive evidence for eternal life. A family directed memorial service will be held at 11:00 a.m. on Friday, September 13th at First Presbyterian Church in Waterloo, IA. Memorials may be given to Northeast Iowa Food Bank, or another helping agency.

Nancy Bishop was born April 20, 1927, in Elizabeth, New Jersey, the youngest of four daughters of Alfred and Gladys (Stanford) Bishop. Alfred was a bakery supply salesman and staunch member of the Second Presbyterian Church. Nancy grew up in... View Obituary & Service Information

The family of Nancy B. Douglas created this Life Tributes page to make it easy to share your memories.

Send flowers to the Douglas family.