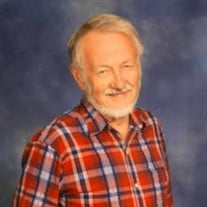 Robert David Peterson died on December 7, 2021, at age 78. He was born on January 17, 1943, in rural Winneshiek County Iowa, the youngest of six children to parents Oliver and Annie (Sollien) Peterson. Robert (Bob) grew up in the country outside of Decorah. He graduated from Cresco High School. He served in the Air Force from 1963-67 in Minot, ND, where he worked on airplane electronics. After returning to Iowa, he graduated from University of Northern Iowa (UNI) in Chemistry. He taught high school and then worked at John Deere as a chemical engineer for most of his career. He earned his M.A. in Counseling from UNI and incorporated his degree into his work. With the ever-present twinkle in his eyes, Bob touched many lives with his kindness and compassion, thoughtful listening skills, and amazing problem-solving abilities. He enjoyed music and blessed people around him with his guitar playing and singing. He had a deep respect for the earth, evidenced by his vegetable, flower, and rain gardens. He was a great supporter of his wife’s artwork and always knew how to mat and frame a piece to showcase it. For the last year of his life, he bravely battled a rare disorder (amyloidosis) and blood cancer. When he passed away at home, he was married 25 years to Dianne Bigler Rider Peterson. He was a bonus dad to 7 kids—Mike Rider (Linda), John Rider (Amelia), Jenny Nehs (John), Diane Bremner (Ron), David Rider (Renee), Shannon Hilscher (Jerome), and Nate Rider (Jennifer)—and numerous beloved nieces, nephews, grandchildren, and great-grandchildren. He is survived by his loving wife and siblings Lorraine Ellickson (Murietta, CA) and Carol Bolson (Decorah, IA). Robert was preceded in death by Oliver and Annie Peterson (parents), sister Beulah (John A.) Shindelar, sister Sylvia (Blaine) Roberts, brother Alton (Eldie) Peterson, and brother-in-law Spencer Bolson. A visitation will be held from 9:30-11 am on Friday, December 17, 2021, at First United Methodist Church, 718 Clay Street, Cedar Falls, Iowa 50613, with a celebration of life and luncheon immediately following. Masks are highly encouraged. Online guestbook at www.richardsonfuneralservice.com. Family will direct memorial donations to www.amyloidosissupport.org and other organizations in Bob’s honor.

Robert David Peterson died on December 7, 2021, at age 78. He was born on January 17, 1943, in rural Winneshiek County Iowa, the youngest of six children to parents Oliver and Annie (Sollien) Peterson. Robert (Bob) grew up in the country outside... View Obituary & Service Information

The family of Robert David Peterson created this Life Tributes page to make it easy to share your memories.

Send flowers to the Peterson family.