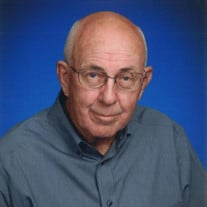 CEDAR FALLS – Sydney “Syd” Layton, 85, of Cedar Falls, died Monday, March 7, 2022, at the Cedar Valley Hospice Home in Waterloo. He was born October 18, 1936, in Iowa City, Iowa, the son of Harold and Helen (Otterbeck) Layton. Syd started working at 10 years old delivering papers in the early morning and shoveling snow for various Cedar Falls residents before heading off to school. He graduated from Cedar Falls High School in 1954 and then completed a Journeyman of Sheet Metal Apprenticeship. During his career he worked as a Journeyman throughout the Cedar Valley and many times traveled to other states to work jobs away from home. In the 1980s Syd began working as a maintenance technician at the University of Northern Iowa. His boys lovingly referred to him as a “professor of sheet metal.” He took great pride in his work and had an excellent reputation across the metro area for his skills and craftsmanship. On November 8, 1959, he married the love of his life, Joann Tangen, in Cedar Falls. They settled in Cedar Falls at their home near the high school where they remained for 57 years. Syd was a lifelong racing fan and attended the Indy 500 several times in the 1950s and 1960s. He also enjoyed racing go-karts and motorcycles in the 1960s and 1970s. Syd was an active member of the Rambling Wheels Motorcycle Club for 54 years. The Layton family enjoyed years and years of camping, riding motorcycles, trips to Colorado, swimming in the West Fork River, and campfires with their Rambling Wheels family. In the 1990s, at the age of 60 years old, Syd rebuilt and started racing a vintage open wheeled sprint car. He and Mom traveled thousands of miles all over the Midwest racing his beloved Number “98 Bearcat.” He competed on famous tracks such as Knoxville Raceway, Belleville Kansas High Banks, and Pikes Peak International Raceway. Syd enjoyed traveling and ensured the family always had a vacation. He excitedly visited most US states, as well as Canada, Mexico, Germany, Austria, Italy, and even East Germany. Syd is survived by his wife, Joann; two sons, Colonel (retired) Tony (Carol) Layton of Weston, MO, and Dan (Dianne) Layton of Cedar Falls; five grandsons, Captain Zachary (Shawne) Layton, Kieran (Hannah) Layton, Seth Layton, Mitchell, Austin and Noah Forker; one granddaughter, Morgan Forker; five great-grandchildren, Kilian, Harper, Hattie-Anne, Everett, and Emery Jo Layton; sister, Linda Lorenz of Clear Lake; and brother-in-law, Gary (Jane) Tangen of Cedar Falls. He was preceded in death by a great-granddaughter, Lucia Belle Layton; and sister-in-law and brother-in-law, Marlys and Steve Spears. A family-directed Celebration of Life will be held 3:00-5:00 p.m. Sunday, March 20, 2022 at the Cedar Falls AmVets Post #49 in Cedar Falls. Inurnment will be at Fairview Cemetery in Cedar Falls. Memorials may be directed to Cedar Valley Hospice.

The family of Sydney "Syd" Layton created this Life Tributes page to make it easy to share your memories.

Send flowers to the Layton family.