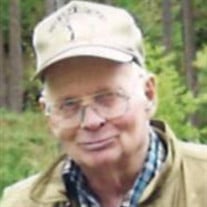 Vernon Dwight Locke, 91, of Denver, died Tuesday, April 19, 2022, at Unity Point-Allen Memorial Hospital. He was born on December 5, 1930, in Calhoun County, IA, the son of Ward and Jessie (Riedesal) Locke. He worked for Rath Packing Company for 35 years and served as an Elder and building inspector for the Church of Jesus Christ of Latter-Day Saints, where he was a member. He served in the Marine Corps in the Korean War. On January 4, 1957, he married Marilyn Smith in Evansdale, IA. She preceded him in death on October 6, 2013. Vernon is survived by his three sons: William (Melody) Locke of Cedar Falls, Larry (Vicky) Locke of Independence, and Jerry (Lyn) Locke of Evansdale; two sisters-in-law, Maggie Smith and Connie Locke; five grandchildren, seven great-grandchildren, and two great-great-grandchildren. He was preceded in death by his parents, wife, grandson, Michael Locke; brothers, Dennis and Malcolm Locke; and sister, Wanda Birner. Funeral service will be at 2:00 p.m. on Saturday, April 23, 2022, at the Church of Jesus Christ of Latter-Day Saints located at 3006 Pleasant Drive, Cedar Falls. Visitation will be 5:00-7:00 p.m. Thursday, April 21, 2022, at Richardson Funeral Service in Cedar Falls. Burial will be at Hillside Cemetery in Cedar Falls. Memorials may be directed to the family.

The family of Vernon Locke created this Life Tributes page to make it easy to share your memories.

Send flowers to the Locke family.