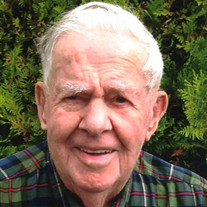 Wilbur Ivan Garrett, 97, died peacefully on October 9, 2021. Wilbur I. Garrett was born at home in Glennie, Michigan, on March 17, 1924 to Benjamin and Effie (Spencer) Garrett. He graduated from Oscoda High School in 1942. He worked on the family farm and in the AC Spark Plug factory in Flint before serving in the Army from March 1945 until December 1946. Wilbur served in Company L, 7th Infantry Regiment during the Asiatic Pacific campaign of World War II. His trip home from the Philippines included surviving a hurricane. He married Bernice (Dunham) Senyko on July 10, 1954 in South Branch, Michigan. Together, they enjoyed spending time with their family, sitting on the front porch and going for drives throughout northern Michigan. Wilbur served in various civic capacities in Glennie including Township Clerk, volunteer firefighter, member of the local VFW, rural postal carrier and school board member for two school districts. He was the Postmaster in Glennie until 1980 when he retired to his other job of farming. Throughout his life, he worshipped at Lott Baptist Church and later at Curtisville Baptist Church. In his early years he enjoyed activities such as ice skating, playing catcher on the town baseball team, bowling, and being a member of Grange. Driving a team of horses or later, his tractor was one of his biggest joys. In his later years, he could be found watching the Detroit Tigers, making fudge to share with friends and family and growing hundreds of pumpkins for the community. Mr. Garrett is survived by one son, Ronald L. (Christiane) Senyko of Glennie; one daughter, Kathleen (Paul) Waack of Cedar Falls, Iowa; four grandchildren, Michael (Shannon) Senyko of Dorr, Yvonne (Timothy) Byce of Lincoln, Jennifer (Brad) Valley of Alpena and Brittany (Seth) Goings of Arvada, Colo; seven great-grandchildren, Bray Valley, Ronald M. Senyko, Bren Valley, Gage Byce, Luke Byce, Oliver Goings and Ivy Goings. He is preceded in death by his beloved wife, Bernice Garrett, his parents and a brother, Herbert Garrett, as well as many friends and extended family. A memorial service will be held on Tuesday, October 26 at Curtisville Baptist Church at 2:00 pm. Wilbur’s favorite, pie and ice cream will be served at The Wolf's Den following the service. The family will have a private interment at the Glennie Cemetery.

Wilbur Ivan Garrett, 97, died peacefully on October 9, 2021. Wilbur I. Garrett was born at home in Glennie, Michigan, on March 17, 1924 to Benjamin and Effie (Spencer) Garrett. He graduated from Oscoda High School in 1942. He worked on the... View Obituary & Service Information

The family of Wilbur Ivan Garrett created this Life Tributes page to make it easy to share your memories.

Send flowers to the Garrett family.