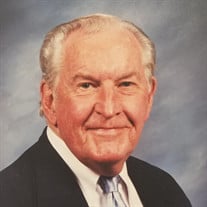 Willard R. (Bill) Hansen died at UnityPoint Allen Hospital in Waterloo, Iowa August 22, 2021 after suffering a stroke. Bill was born on March 11, 1931 to Thomas and Jennie (Jepsen) Hansen of Cedar Falls, Iowa. He graduated from Cedar Falls High School in 1949, and subsequently attended Dana Lutheran College in Blair, Nebraska, where he earned a B.S. degree in Science Education. After college, he taught high school and coached for several years before returning to Cedar Falls to join his brother Jim at Hansen and Hansen, Inc. where he sold insurance and real estate from 1955-1980. During his years in Cedar Falls, he was heavily invested in the community. He served as president of the Chamber of Commerce, was a member of Nazareth Lutheran Church, and was active in Elks and Rotary. He received several distinguished awards for his contribution to the Cedar Falls Education Association and also for service with the University of Northern Iowa. Bill is perhaps best known for his tenure in the Iowa State Legislature, first in the House from 1968-1972, and then in the Senate from 1972-1980. After leaving the Legislature, he continued his work as a lobbyist for the Association of General Contractors of Iowa for 6 years, and then was appointed to the Iowa Racing and Gaming Board for two 3 year terms by then Governor Branstad. In 2002, he and Maree moved to Sun City West, Arizona, where they resided until Maree’s death in 2016. There, Bill remained active in his church and various community organizations, and was a 4 term President of The Property Owners and Resident Association. He also remained active in Rotary. Bill was preceded in death by his wife Maree, his parents, and his brother Jim. He is survived by three children from his first marriage; Cheryl Hansen (Dan McCabe) of Arlington Massachusetts, Bruce and Mark Hansen, both of Madison, Wisconsin, as well as two step children, Kimberly Lawson of Brooklyn, New York, and Kay Roof (Bob) of Manchester, Iowa. He also has three grandchildren, Abby and Juli McCabe, and Lawson Roof. Bill lived a full and meaningful life. He was a kind, principled man who valued his family and Christian Faith. He was grateful to be an American Citizen, and believed in service to others, and had the ability and desire to reach out to others who were struggling or hurting. He was an optimist to the end, and enjoyed visits from loved ones. He was always up for a friendly spirited debate regarding the news and issues of the day. He will be missed. Services are being planned with the help of Richardson Funeral home for a later date to be announced.

The family of Willard R. Hansen created this Life Tributes page to make it easy to share your memories.

Send flowers to the Hansen family.